Three parts of the Trip Nip

YHC was feeling extremely sore as the ultimate Q for the Trip Nip was imminent…5th straight workout after being off a week for vacation, played pick up soccer last night…and the 5ishK Extra Credit with Elf, Nickelback and Cortes was great on the fellowship, but didn’t do much to loosen things up…We returned a moment after 5:30 to a solid crowd of 8 PAX who were loosening up.  YHC was invigorated by the positive energy that emanated from the PAX. We moved from the parking deck to the parking lot across the street and circled up for the…

The 12 PAX broke up into two groups of 6 for a Ricky Bobby with travelling merkin burpees with ascending quantity of broad jumps and merkins: We assembled into two lines of 6 PAX in head to toe planks.  The PAX at the end of each line, did a travelling burpee (broad jump, followed by a burpee), then a double broad jump, double merkin burpee, then a triple broad jump, double merkin burpee (and so on).  Once that PAX made it to the front, he would plank and the PAX at the back would begin his journey up to the front.  The other PAX in the line would be in a plank while they waited their turn.  As each PAX passed, the PAX would rotate from a standard plank, to a left arm high, then back to regular, then right arm high and so on.  We continued until we reached the end of the parking lot and moseyed back to the other side of the parking lot.

We then broke up into 6 teams of two for a modified Dora.

Each team of two accumulated:

100 Monkey humpers (probably not the best exercise to do out in the open as day broke).

While one partner was doing the exercises indicated above, the other partner would run to the far end of the parking lot, do 10 tuck jumps and return to trade out.

YHC conveyed how slowing down and stretching, meditating, yoga – all can be hard to do, but are very good for you in mind body and spirit.  We often fail to stretch after doing hard things (both physically, mentally and spiritually) and YHC wanted to bring some of that to the Pax.

We started with a Cobra Pose then to Upward Facing Dog, then Downward facing Dog, then onto inside dragon pose alternating right then left. We then did a series of Warrior Pose I and Warrior Pose IIs.  It was at this point that Halfback (who is a ninja Yogi) stepped up and provided better instruction in providing a much more confident and steady lead to our closing Yoga session and we finished off with a nice flow of pigeon pose, cobra pose, child’s pose and a great finish.  YHC was going to finish off with the signature Heels to Heaven, but alas there was note time.

YHC thanked the PAX for their support, encouragement and hospitality.  YHC learned of the background of the Trip Nip – so thanks to Nubbin, Nickelback and the genius writers of Friends.

Prayers for Amy (?) a co-worker of Elf, Cortes, and Kiffin, who is dealing with a health issue.

YHC was touched by the Trip Nip Plaque and the great Hillsborough F3 Shirt!  Thank you!  Inspired by the ubiquitous promotion of the new iteration of Wonder Years – and the always awesome, fitting and iconic With A Little Help From My Friends by Joe Crocker. 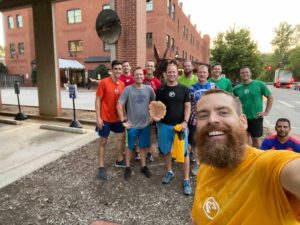