After last year’s winter solstice 8K, YHC had big ideas about bringing PAX from far and wide to participate in this huge annual F3 event.  There would be shiny, hand-crafted wooden “medals” for all finishers, drink stations, exotic dancers and even more exotic bands at every turn, chip timing and all the Gu one could squeeze past one’s pumping bellows.  Alas – none of this came to pass this year.  Advertising was kept to a minimum, a perfect excuse to slack on the metals and other elements.  The promise of $50 to the charity of one’s choice, should one finish before YHC, didn’t, luckily(!), draw the crowds it might have.

Fortunately today’s Rabbit had a co-Q and Ironlung came up big with ribbons, sweet race swag, and professional-level route marking (YHC helped with the last bit!).  The turnout was great as it has been throughout this crazy year at The Rabbit.  The Rabbit has seen several FNGs and is consistently hitting double digit numbers.  It has expanded to include a regular run on Thursdays (The Jackalope) and seems to be gaining steam for a regular Sunday morning trail run.

14 PAX circled up including one FNG.  Flowbee rolled up and we were 15.  Here’s what we did after that:

Just kidding – back to The Thang:

After a slow mosey to the start line, we stood awkwardly in the morning chill, awaiting someone, anyone, to signal the start of the race.  Eventually YHC realized that someone was he, and the signal was given.  We were off.

Flowbee took the early lead as we strung out down the twinkling, starlit curve of North Serenity Hill Circle, adding the wandering of our headlamps to the otherwise still mosaic of lights.  As Flowbee faded into the distance on his way to an impressive win and course record, YHC settled into a rhythm.  The fellowship of F3 is the most important aspect, in the opinion of this correspondent, but as has been stated before, there’s something freeing about just running hard in the darkness of the morning.  It clears the mind (sometimes too completely, as evidenced by today’s ball-of-man/not-ball-of-man rambling) and centers one for the day ahead.

Not everyone was running alone today.  While Flowbee headed back down the route to pick up the six, YHC was able to take in the stories of the morning.  There were great efforts by old friendly rivals – throughout the run Zook was counting the seconds each time Nescafe passed a landmark to when he, himself, would pass as he trailed him around the loop.  Zook could tell he was gaining ground, but Nescafe was too strong today, putting up a course PR good enough for 3rd today and 3rd all time. Zook was right behind him with a strong effort.

Next could be seen coming down the home stretch a runner whose distinct stride makes him identifiable from a great distance, even in the gloom.  Beaujolais crossed with Forbidden Fruit and Paperboy seconds behind.  Forbidden Fruit, baffled by the ease with which Beaujolais’ stride carries him over the course was too preoccupied to notice Paperboy making a last minute finishing sprint to nab 6th.  Paperboy may have started slow, but did not finish that way.

Speaking of starting paces, Cricket and RG3 were next, with Cricket taking this one.  Last year it was RG3 by seconds despite a poor decision on Great Ridge Parkway.  This year, Cricket held on despite not deviating from his modus operandum: go out as fast as possible, stop and walk if necessary but never begin a race with any semblance of care.  Strong work!

YHC headed down the course to see who he could pick up for a final push – the lucky PAX was Jingles, on his own just ahead of Brotox and Homes. We crossed together with Jingles picking up the pace for the last quarter of a mile.  Brotox and Homes, Froman and Ironlung had planned a fellowship pace from the start and finished two by two, forgoing the raised hand-holding, evidently in respect of current CDC guidance re touching other humans.

Last, but by far not least Flowbee and Paperjam could be seen coming up the finishing stretch just seconds behind the last finishers.  Paperjam only ran 5 miles for the first time this year a couple weeks ago, and today crossed the finish line with a PR in just about everything.  Stronger work!

Check out all the PRs below- 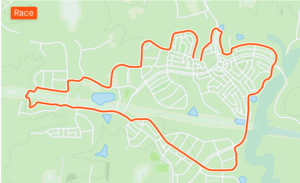 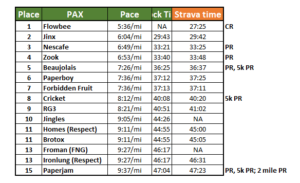 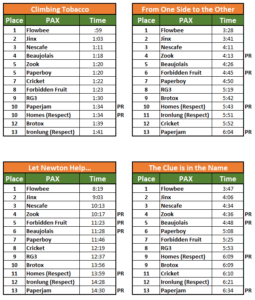 YHC mumbled several disjointed points about the benefits of F3 and how we might apply these aspects in our everyday life.  F3 is a reliable friend – it’s welcoming and positive and always there, even when YHC is not posting.  If we can be this positive, reliable place in the lives of our loved ones, they will always know they have a place to return to whenever they need guidance, encouragement, or just an ear.

YHC has a sad history of being unprepared for the BOM.  New Year’s is just around the corner and it’s a nice starting point to better one’s self.  One cannot simply continue to blame hypoxia.